This article is based on guidelines given in EEMUA 190. Design of mounded bullet is carried out as per PD 500 as suggested in EEMUA 190 (unless specified by the customer). Other codes like ASME also can be used for design calculations. Design of shell courses for internal and external pressure at given design conditions is done as per specified design code. Selection and arrangement of stiffening ring have large impact on design thicknesses. Once bullet shell and dish end thicknesses are finalized, whole equipment is considered under following loads: 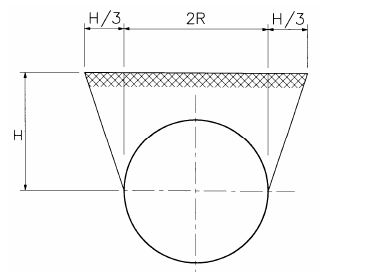 Determination of uneven support, two calculations need to be made as given below using design shell thicknesses and loads Q1, Q2, and Q5.
• Using Annexure-C from EEMUA code 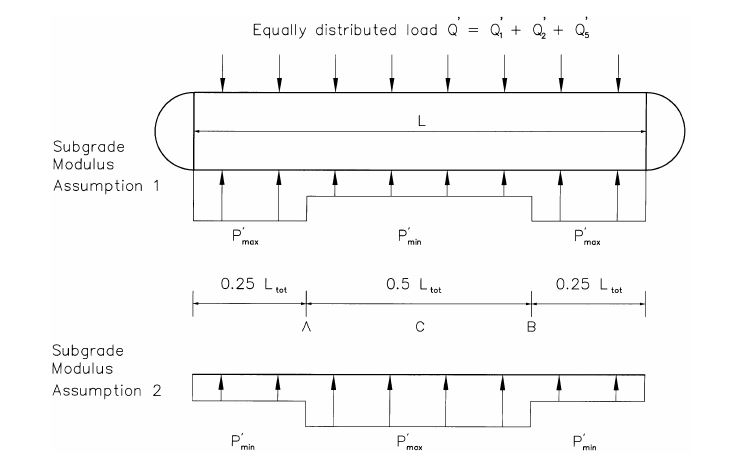 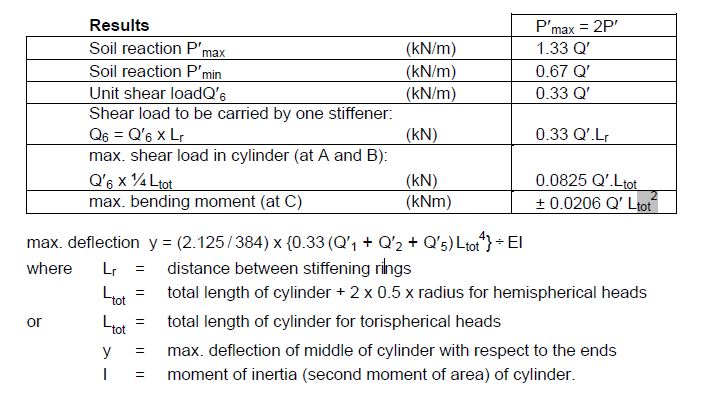 • Carry out a ‘beam on elastic foundation’ analysis, using the long-term subgrade moduli determined in the soil investigation. The calculation is usually carried out using a finite element method.
From these two calculations, governing result is to be used for the stiffener design i.e. resulting Q6.

Load 7- Load due to changes in the vessel length (Q7)

Axial loads need to be considered for the verification of longitudinal stresses. When the vessel expands or contracts due to temperature or pressure variations, the surrounding soil will exert a frictional force on the vessel. A coefficient of friction = 1 is conservative. The unit friction force Fsoil will be:
Fsoil = Q1 + Q2 + 2Q5 (kN/m)
The axial load due to friction will be maximum at mid-span of the vessel and will be equal to Fsoil X half vessel length, provided the movement of the vessel is enough to develop the full friction.
The resulting longitudinal stress due to friction will be compressive if the vessel expands, and tensile if the vessel contracts. When the vessel expands, the soil pressure on the domed ends will increase, which will result in an increased axial compressive load.

If the overpressure and the reflection coefficient are used, the pressure to be taken into account is 1.5 x 15 = 22.5 kN/m2. The load per stiffening ring is:
Q9 = (2R + ⅔ H) x L x 22.5 (kN)
Q9 may be considered as an increase in the weight of the mound and should be treated in the calculations in the same manner as Q5.

The supporting load P by the sand-bed foundation to be allocated to one stiffening ring is the maximum of the two analyses: using the assumed support distribution from Appendix C and the ‘beam on elastic foundation’ approach as mentioned in Load-6
When using the assumed support distribution from Appendix C:
P = 1.33 x {Q1 + Q2 + Q5 (+ Q9, if applicable)} (kN)
When using the beam on elastic foundation approach:
P = P’ x L (kN)
where P is the maximum unit support load
It is assumed that the sand-bed will exert a radial pressure on the cylinder. The angle over which the cylinder is supported depends on the foundation, but for a properly prepared sand bed an angle of 120° is a realistic assumption.
Conservatively, it is assumed that pressures are cosine-like distributed according to:
p = p0 cos {1.5 (180° − ψ)} for 120° < ψ < 240°
The maximum pressure p0 at ψ = 180° is:
p0 = P/(1.2 x R x L) (kN/m2) 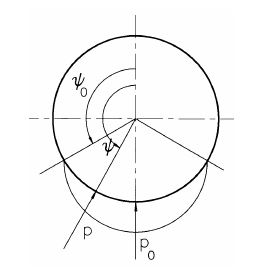